What Is A Dog Whisperer?

A dog whisperer is somebody who has developed a high level of awareness and understanding of the mind and natural instincts of the canine species. This allows human and dog to form a deep connection free of the many constraints humans normally put in the way.

Because us humans and our dogs are a different species we often encounter difficulties in communicating effectively with each other. We can’t just sit down with them and have a conversation over a nice cup of coffee, like we would with our human friends. But what can we do? I’ll get into that a little later, but you could say that being a dog whisperer means that you have broken down these barriers of communication and have developed a very real form of two way communication with dogs. A dog whisperer realigns his/her methods of communication so that it matches up with and is relevant to dogs. What am I thinking?

Unfortunately the majority of human-dog relationships in this world are one way, lopsided affairs. It’s usually us humans endlessly issuing commands or reprimanding our dogs, seemingly oblivious to what our dogs are actually feeling and trying to communicate to us. Look at it this way – think of a very dominant, overbearing person you have come across in your own life (in my case it was a boss I had a few years back). This person probably doesn’t care much for how you are feeling and what your thoughts are. They just want to get their message across to you and tell you off when you don’t reach their standards. When you do try to do or say something they fail to acknowledge your attempts or simply ignore you. How do you feel? frustrated.., helpless.. and probably much worse. I believe many of our dogs live in this type of restrictive environment every day. Our dogs are constantly reaching out and trying to communicate with their human family, but somehow it seems to go unnoticed or at least misinterpreted.

The thing is our dogs are continually speaking to us in their language. They communicate with us (and each other) through various means using energy, body language, scent, facial expression, the movement of ears and tail, overall posture and voice (barking, growling). As you can see, most of these signals or expressions are non verbal where’s humans communicate in a mainly verbal manner. What a dog whisperer does is acknowledge the difference between human and dog. A dog whisperer takes a step back, shuts up, observes and understands these gestures our dogs continue to express to us. When you do this you can’t help but form a deep connection with your dog as you will understand his wants and needs and therefore can respond in a manner which is appropriate to the situation, and is expected by your dog. You are communicating, your dog to you, and you to your dog – instead of merely issuing and enforcing an order and having your dog “do something for you”. When we are in this position of understanding our dogs it’s only logical that we are better placed to address their problems and shape their behavior. A dog whisperer treats a dog as a dog, not as a fluffy four legged human. They respect a dog for what it is and work with mother nature and the natural instincts of the canine species. Sadly most dogs aren’t afforded this same respect and level of understanding. Many well intentioned “dog lovers” smother their dogs with affection and the best of everything (toys, treats, fancy beds etc.) but this is not what dogs actually crave. A dog whisperer will provide the species specific, very real needs of the dog so they can live a fulfilling, peaceful, happy and well balanced life.

Picture this all too common scenario. You arrive home from a hard day at the office to find that your beloved dog has once again chewed up the cushions that were nicely decorating the sofa. You’re angry. In a raised voice you swear at him/her and tell him how disappointed you are. You then throw your shoe at him as you bend down to pick up the mess. As you are blowing off steam your dog is avoiding you, head down low, eyes looking up almost sheepishly, with tail firmly tucked between his hind legs.

At this point many dog owners look at their dog and say “look at the little bugger, he knows what he’s done wrong, just look at how guilty he looks”. This is the wrong conclusion to make. Your dog doesn’t think like that (like a human) and he doesn’t have a clue what you are rambling on about. He makes no connection between the chewed up cushions and your mood.

Dogs live in the present moment, so what he is picking up on and reacting to is your angry energy, raised voice and threatening body language. He may have also learned what the consequences are when you arrive home in this type of mood – he was probably waiting for the shoe to come his way! This scenario is an example of how us humans and our dogs view the very same situation from an entirely different perspective. Dog whispering is about understanding and recognizing that these differences exist, then acting accordingly. 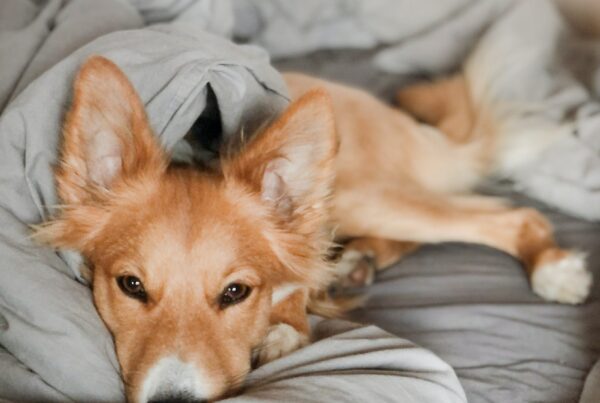 Must Read Tips Before You Take Your Dog Into Bed Tonight